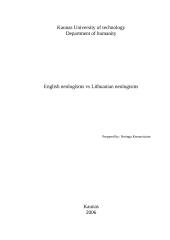 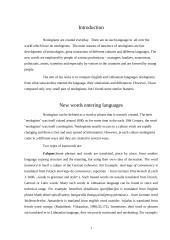 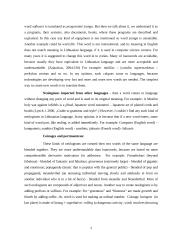 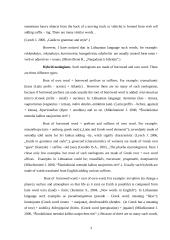 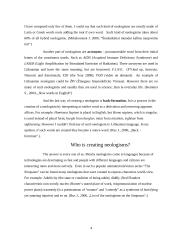 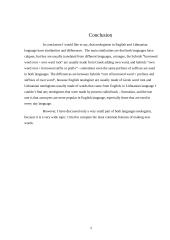 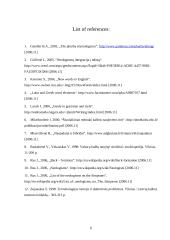 Neologisms are created everyday. There are no such language in all over the world which have no neologisms. The main reasons of nascence of neologisms are fast development of technologies, great interaction of different cultures and different languages. The new words are employed by people of various professions – managers, bankers, economists, politicians, artists, scientists and especially by visitors to the countries and are favored by young people.
The aim of my woks is to compare English and Lithuanian languages neologisms; from what sources they entered the language, their similarities and differences. However, I have compared only very small part of neologisms, but I found some similar features.
Neologism can be defined as a word or phrase that is recently created. The term "neologism" was itself coined around 1800; so for some time in the early 19th Century, the word "neologism" was itself a neologism. Neologisms usually occurs in a culture witch are rapidly changing and there is fast and easy spread of information. However, in each culture neologisms come in a different ways and they are created in several ways.
Two types of loanwords are:
Calques.Some phrases and words are translated, piece by piece, from another language copying structure and the meaning, but using their own rules of derivation. The word loanword is itself a calque of the German Lehnwort. For Example: marriage of convenience is translated from French marriage de convenance; superman - from German Ubermensch (Lynch J. 2006, „Guide to grammar and style“.). Such loaned words are usually translated from French, German or Latin words. Many such words in Lithuanian language can be found in since and technical range. For example: lentelinės detaliosios specifikacijos is translated from English phrase blank detail specification; bangorašis (bangų užrašymop prietaisas) – from German word Wellenschreibe. Autsaideris is tranlated from english word outsider, vojažas is translated... 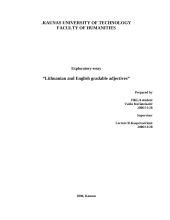 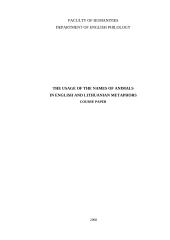 English names and their origins 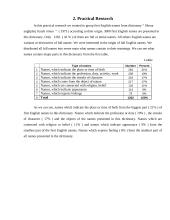 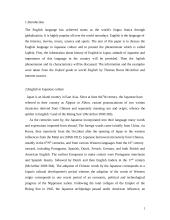