nemoku.lt
Navigacija
Darbų paieška
Istorija > Visuotinė istorija > The end of the nation is on its way

The end of the nation is on its way 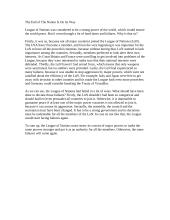 Firstly, it was so, because not all major countries joined the League of Nations (LoN). The USA hasn’t become a member, and from the very beginning it was important for the LoN to have all the powerful countries, because without having that, LoN seemed to lack importance among the countries. Secondly, members preferred to look after their own interests. As Great Britain and France were unwilling to get involved into problems of the League, because they were interested to make sure that their national interests were defended. Thirdly, the LoN haven’t had armed force, which means that only weapons were sanctioned, but no soldiers were provided. Lastly, the LoN had experienced so many failures, because it was unable to stop aggression by major powers, which were not satisfied about the efficiency of the LoN. For example, Italy and Japan were free to get away with invasion to other counties and his made the League look even more powerless and...