The Culture Of Norway 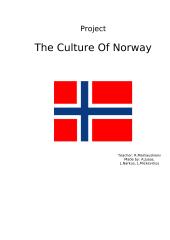 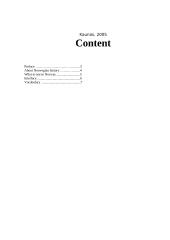 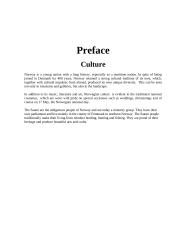 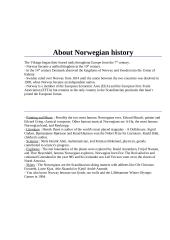 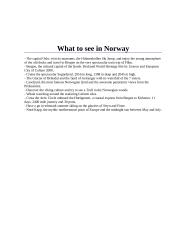 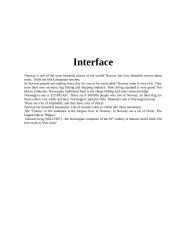 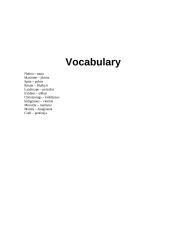 Vocabulary ..............................................7
Preface
Culture
Norway is a young nation with a long history, especially as a maritime nation. In spite of being joined to Denmark for 400 years, Norway retained a strong cultural tradition of its own, which, together with cultural impulses from abroad, produced its own unique diversity. This can be seen not only in museums and galleries, but also in the landscape.
In addition to its music, literature and art, Norwegian culture is evident in the traditional national costumes, which are worn with pride on special occasions such as weddings, christenings and of course on 17 May, the Norwegian national day.
The Saami are the indigenous people of Norway and are today a minority group. They have their own parliament and live mainly in the county of Finnmark in northern Norway. The Saami people traditionally make their living from reindeer herding, hunting and fishing. They are proud of their heritage and produce beautiful arts and crafts.
About Norwegian history
The Vikings began their feared raids throughout Europe from the 7th century.
- Norway became a unified kingdom in the 10th century.
- In the 14th century Denmark absorved the kingdoms of Norway and Sweden into the Union of Kalmar.
- Sweden ruled over Norway from 1814 until the union between the two countries was disolved in 1905, when Norway became an independent nation.
- Norway is a member of the European Economic Area (EEA) and the European Free Trade Association (EFTA) but remains as the only country in the Scandinavian peninsula that hasn't joined the European Union.
- Painting and Music : Possibly the two most famous Norwegians ever, Edvard Munch, painter and Edvard Grieg, classical composer. Other famous musical Norwegians are A-Ha, the most famous Norwegian band, and Røyksopp.
- Literature : Henrik Ibsen is author of the world's most played stageplay - A Dollshouse. Sigrid Undset, Bjørnstjerne Bjørnson and...

The rise of the consumer culture 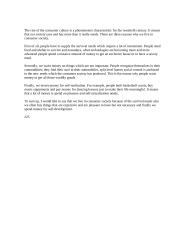 Differences and similarities of colour meanings in the diverse cultures 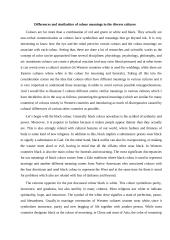 The ways we can ensure our culture 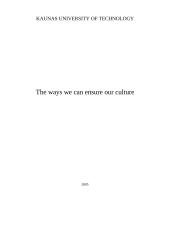 Paragraph 100-120 words about how you understand the culture. 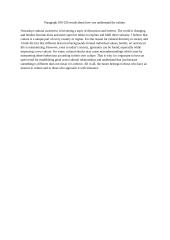