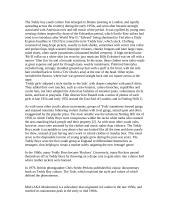 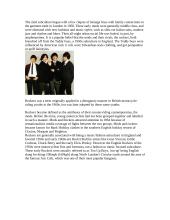 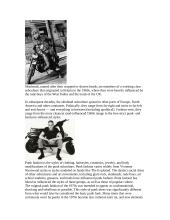 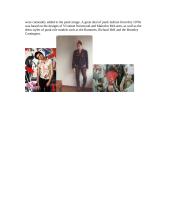 ﻿The Teddy boy youth culture first emerged in Britain (starting in London, and rapidly spreading across the country) during the early 1950s, and soon after became strongly associated with American rock and roll music of the period. It was typified by young men wearing clothes inspired by those of the Edwardian period, which Savile Row tailors had tried to re-introduce after World War II: "Edward" being shortened to Ted after a Daily Express headline in 1953 first coined the term 'Teddy boy', which stuck. Clothing consisted of long drape jackets, usually in dark shades, sometimes with velvet trim collar and pocket flaps, high-waisted 'drainpipe' trousers, chunky brogues and later large crepe-soled shoes, often suede (sometimes nicknamed brothel creepers). A high-necked loose 'Mr B' collar on a white shirt (as worn by jazz musician Billy Eckstine) was set off with a narrow 'Slim Jim' tie and a brocade waistcoat. In the main, these clothes were tailor-made at great expense and paid for through many weekly instalments. Preferred hairstyles included long, strongly moulded greased-up hair with a quiff at the front, with the side hair combed back to form a 'DA' (duck's arse) at the rear of the head. Other styles included the Boston, where hair was greased straight back and cut square across at the nape.
As with some other youth culture movements, groups of 'Teds' sometimes formed gangs and enjoyed notoriety following violent clashes with rival gangs, seized upon and often exaggerated by the popular press. The most notable was the infamous Notting Hill riot of 1958, in which Teddy Boys were conspicuous within the racist white mobs who roamed the area attacking black people and their property.[2]. As with most other youth cults, however, most were attracted by the clothes and music rather than violence. The Teddy Boys made it... 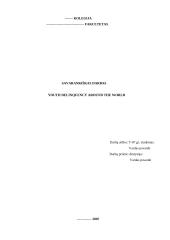