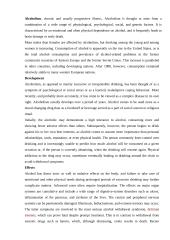 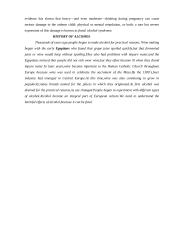 ﻿Alcoholism, chronic and usually progressive illness,. Alcoholism is thought to arise from a combination of a wide range of physiological, psychological, social, and genetic factors. It is characterized by an emotional and often physical dependence on alcohol, and it frequently leads to brain damage or early death.
More males than females are affected by alcoholism, but drinking among the young and among women is increasing. Consumption of alcohol is apparently on the rise in the United States, as is the total alcohol consumption and prevalence of alcohol-related problems in the former communist countries of Eastern Europe and the former Soviet Union. This increase is paralleled in other countries, including developing nations. After 1980, however, consumption remained relatively stable in many western European nations.
Alcoholism, as opposed to merely excessive or irresponsible drinking, has been thought of as a symptom of psychological or social stress or as a learned, maladaptive coping behaviour. More recently, and probably more accurately, it has come to be viewed as a complex disease in its own right. Alcoholism usually develops over a period of years. Alcohol comes to be used more as a mood-changing drug than as a foodstuff or beverage served as a part of social custom or religious ritual.
Initially, the alcoholic may demonstrate a high tolerance to alcohol, consuming more and showing fewer adverse effects than others. Subsequently, however, the person begins to drink against his or her own best interests, as alcohol comes to assume more importance than personal relationships, work, reputation, or even physical health. The person commonly loses control over drinking and is increasingly unable to predict how much alcohol will be consumed on a given occasion or, if the person is currently abstaining, when the drinking will resume again. Physical addiction to the drug may occur, sometimes eventually leading to drinking around... 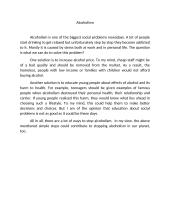